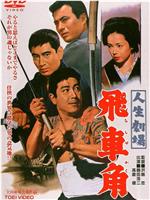 Based on a book by Ozaki Koyo about a yakuza's honor, duty and loyalty. Hishakaku asks his woman, Otoyo, a former geisha, to move to Tokyo, where they are taken in by **** Kokin. Due to his obligation to Kokin, he is involved with a gang war and is arrested. When he is released from jail, everything has changed and Otoyo unwittingly causes him the greatest heartache a man could...